It was shown decades ago that a radical pair reaction with anisotropic hyperfine interactions would exhibit sensitivity to external magnetic fields - even fields as weak as the geomagnetic field - see [T. Ritz, S. Adem & K. Schulten; Biophys. J., 78, 707-718 (2000)] or [K. Schulten, C. E. Swenberg & A. Weller; Zeitschrift für Physikalische Chemie, 111, 1-5 (1978)]. So far, only model systems have been studied, but we want to investigate whether such a chemical compass mechanism can be realized in a real molecular system, in particular the photoreceptor proteins called cryptochromes. 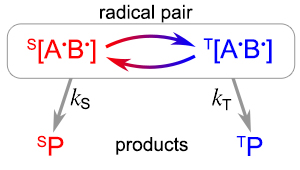 One of the most important interactions for the chemical compass is the hyperfine interaction: due to the conservation law of angular momentum (spin is an intrisic angular momentum - a quantum mechanical property of elementary particles), interconversion between singlet and triplet states cannot happen unless it is accompanied by an "opposite change" in the environment; e.g. a nuclear spin may change its spin state at the same time. Thus without hyperfine interactions with nearby nuclei, the radical pair would be stuck in the initial state.

The change in the ratio of singlet and triplet products obtained by rotating the molecular system provides our compass: if we measure this ratio of the products for different orientations of the molecular system, we could infer the direction of the external magnetic field from these data.

Figure 1 shows just one possible model for the radical pair mechanism; there are many possible models, and it remains to be shown which model is actually used for magnetoreception.