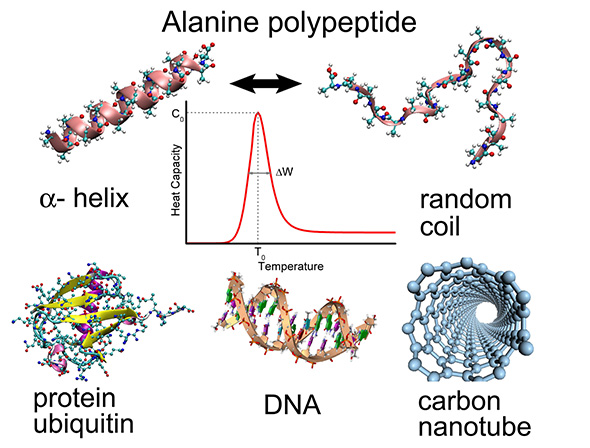 We have developed a novel ab initio theoretical method for the phase transition description of the mentioned molecular systems [Yakubovich, Solov'yov, Solov'yov, Greiner, 2006-2009]. In particular, it was demonstrated that in polypeptides one can identify specific twisting degrees of freedom responsible for the folding dynamics of the amino acid chain (see Fig. 2). 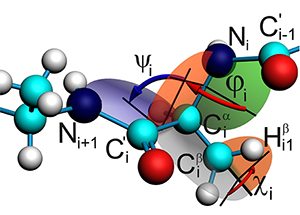 The essential domain of the potential energy surface (PES) of polypeptides with respect to these degrees of freedom can be calculated and thoroughly analysed on the basis of ab initio methods such as density functional theory or Hartree-Fock method (see Fig. 3). 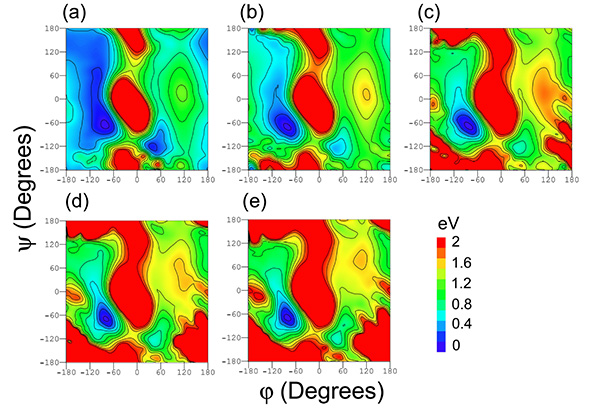 Figure 3. PESs for different amino acids of alanine polypeptide consisting of 21 amino acids calculated as the function of twisting dihedral angles φ and ψ in: (a) second alanine, (b) third alanine, (c) fourth alanine (d) fifth alanine and (e) tenth alanine. Amino acids are numbered starting from the NH2 terminal of the polypeptide. Energies are given with respect to the lowest energy minimum of the PES in eV.

This knowledge is sufficient for the construction of the partition function of a polypeptide chain and thus for the development of its complete thermodynamic description, which includes calculation of all essential thermodynamic variables and characteristics, e.g. heat capacity, PT temperature, free energy etc. The method has been proved to be applicable for the description of the PT in polyalanine of different length by the comparison of the theory predictions with the results of several independent experiments and with the results of molecular dynamics simulations [Yakubovich, Solov'yov, Solov'yov, Greiner, 2006-2009].

Comparison of the results of this method with the results of molecular dynamics simulations (see Fig. 4) allows one to establish the accuracy of the new approach for molecular systems of relatively small size and then to extend the description to the larger molecular objects, which is especially essential and interesting in those cases when molecular dynamics simulations are hardly possible because of computer power limitations. 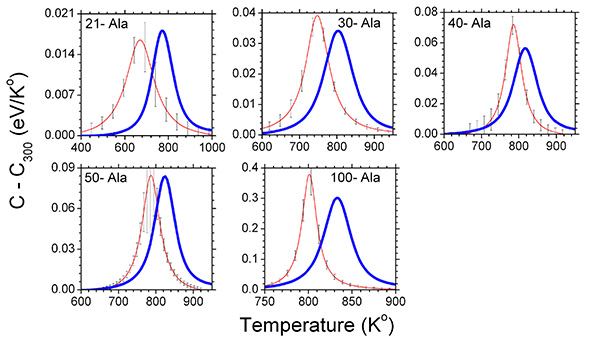 Figure 4. Dependencies of the heat capacity on temperature calculated for the alanine polypeptides consisting of 21, 30, 40, 50 and 100 amino acids. The results obtained using the statistical approach are shown with the thick solid line, while the results of MD simulations are shown with the thin solid line. C300 denotes the heat capacity at 300 K.