Although the photoactivated protein cryptochromes have been extensively studied in the last years (see vision-based magnetoreception), the photoactivation reactions in cryptochromes from different organisms are still strongly contested. In (Solov'yov, Schulten, 2012) a theoretical analysis method for identifying cryptochrome's signaling reactions has been presented. The analysis involves comparison of measured and calculated reaction kinetics in cryptochrome. Applications of the method yield an exemplary light-driven reaction cycle, supported through transient absorption and electron-spin-resonance observations together with known facts on avian magnetoreception.

Transient states in cryptochrome photoactivation reaction can be revealed through the transient absorption measurements of a cryptochrome containing sample, as schematically illustrated in Fig. 1. The sample containing cryptochrome is irradiated with a pulsed laser beam (red) that generates a measurable concentration of excited states in the light absorbant cofactor Flavin adenin nucleotide (FAD). When the FAD cofactor absorbs the light an excited state (FAD*) is created within the system. The excited state, FAD*, decays through a series of intermediate radical states back to FAD. Some of the intermediate states can be probed by a probe beam (white) and is used to measure the absorption spectrum of transient species. Additionally, magnetic field effects in cryptochrome can be studied if the sample is subjected to an external magnetic field. 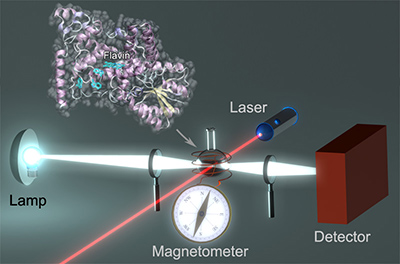 The measurements of cryptochrome transient photoabsorption suggest different reaction schemes, consistent with the same experimental observations. In (Solov'yov, Schulten, 2012) a reaction scheme of cryptochrome photoactivation is singled out and inactivation, namely, the one shown in Fig. 2, is proposed. It is demonstrated how the scheme can be reconciled with observed time-dependent absorption spectra. The scheme incorporates the key observation that the flavin cofactor in cryptochrome is observed in three interconvertible redox forms, FAD, FADH•, and FADH–. The various rate constants shown in Fig. 2 capture the different processes underlying cryptochrome photoactivation and relaxation, assuming all processes can be described through first order kinetics. 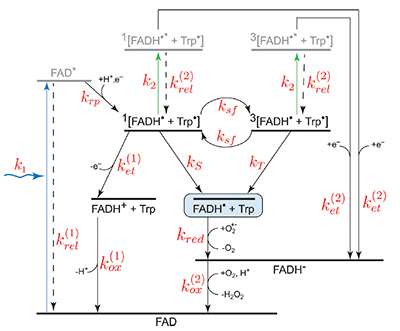 The time evolution of the intermediate states concentrations in cryptochrome shown in Fig. 2 has been computationally studied in (Solov'yov, Schulten, 2012). The time dependence of the intermediate states concentrations in cryptochrome allows to determine the change in the transient absorption spectra in time. Figure 3 shows the absorbance of the cryptochrome sample excited by laser pulses of different intensity for the probe-beam of wavelengths 550-630 nm (plot a), and 490-550 nm (plot b). The laser pulse duration of 5 ns is taken consistent with experiment (M. Liedvogel, et al.PLoS One 2007, 2, e1106). the dots in Fig. 3 correspond to the experimentally measured data recorded for the pulse energy of 5 mJ

Molecular identity of the photoactivation reaction in cryptochrome

Since the molecular origins of cryptochrome photoactivation is presently unknown, in (Solov'yov, Domratcheva, Moughal Shahi, Schulten, 2012)  the first step in revealing the molecular foundations of this reaction is taken. The unraveling of the mechanism involves radical pair formation through electron transfer, as shown in Fig. 4. To describe this process and underlying photochemical mechanisms, a combination of quantum chemical calculations and molecular dynamics simulations on plant (Arabidopsis thaliana) cryptochrome were carried out. 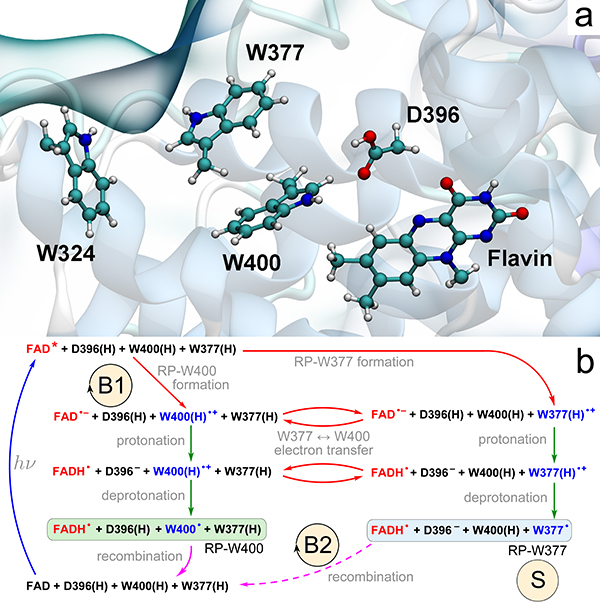 Figure 4. Electron-and proton-transfer reactions in cryptochrome. (a) Flavin cofactor, the tryptophan triad W400, W377, W324 and the D396 residue forming the active site of cryptochrome-1 from A. thaliana. (b) Schematic representation of the photoactivation reaction. Cryptochrome photoactivation is triggered by blue-light photoexcitation of the FAD cofactor (blue arrow) initially present in the oxidized state. Excited flavin, FAD*, receives an electron from one of the nearby tryptophans (red arrows), either W400(H) (RP-W400) or W377(H) (RP-W377). Electron transfer from tryptophan leads to formation of an ionic FAD•- + W(H)•+ radical pair, which is then transformed into a stable neutral FADH• + W• radical pair state through proton exchange with the nearby D396 (two green arrows). RP-W400 and RP-W377 interconvert through a W400(H) → W377(H) electron-transfer process (red arrows). In contrast to RP-W377, the neutral radical pair RP-W400 recombines back to the initial state through coupled electron-proton transfer (solid purple arrow). The RP-W377 state is stabilized through W377(H)•+ deprotonation into solution and, therefore, returns to the initial state only on a very long time scale (dashed purple arrow). The reaction cycle B1 and the reaction B2 are primary candidates for establishing magnetoreception; the state labeled S is a primary candidate for being the signaling state.

The results in Fig. 5 demonstrate that after photoexcitation a radical pair forms, becomes stabilized through proton transfer, and decays back to the protein's resting state on time scales allowing the protein, in principle, to act as a radical pair-based magnetic sensor. 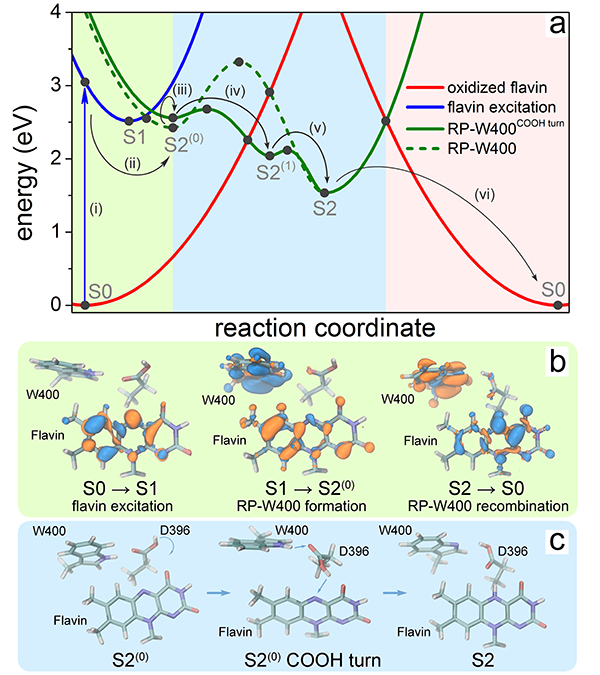 Figure 5. Characterization of the cryptochrome photoreaction involving flavin, W400, and D396. (a) Calculated potential energy profiles of the key electronic states describing cryptochrome photoactivation. The energy of oxidized flavin is shown in red, excited flavin in blue, and the radical pair state RP-W400 in green. Solid circles represent computed energies, while lines show schematic potential energy surfaces. The colored background distinguishes electron-transfer (light green), proton-transfer (light blue), and coupled electron-proton transfer (pink) steps. (b) Change of electron density due to flavin photoexcitation (S0 → S1), photoinduced radical pair formation (S1 → S2(0)), and recombination (S2 → S0). The initial distribution of electron density is shown in blue, while the final distribution is shown in orange. (c) Rearrangement of the COOH- group of the D396(H) residue catalyzing the protonation of flavin by the W400(H)•+ radical through formation of a D396- intermediate (minimum S2(1) in (a)).

Structural rearrangement subsequent to FAD•- + W400(H)•+ radical pair formation was described through MD simulations. The formation of this radical pair was seen to trigger within cryptochrome a slight but crucial reorientation of the D396(H) residue as illustrated in Figs. 5c and 6. Prior to radical pair formation, the COOH- group of D396(H) forms a hydrogen bond with the neutral W400(H) residue with a bond length, d(HW400-OD396), fluctuating around 3 Å as seen in Fig. 6a; the O-HD396 group of D396(H) forms a hydrogen bond with the backbone oxygen atom of the M381 residue (data not shown) as also observed in the cryptochrome crystal structure. We note that a hydrogen bond between the hydrogen atom of the COOH- group and the N5 atom of the flavin group is not possible as is evident from the d(HD396-N5flavin) distance fluctuating around 6 Å, as shown in the bottom plot of Fig. 6a, due to steric constraints in the cryptochrome active site.

Once flavin gains a negative charge and W400 becomes positively charged, i.e., once the FAD•- + W400(H)•+ radical pair is formed, D396(H) is seen in a second MD simulation to become involved in a remarkable structural transformation. Figure 6b shows that in the radical-pair state, two stable hydrogen bonds connecting flavin FAD•-, D396(H) and W400(H)•+, exist, resulting within a nanosecond in the d(HW400-OD396) and d(HD396-N5flavin) distances assuming average values of 2.0 and 2.7 Å, respectively. This rearrangement of D396(H) permits FAD•- protonation and W400(H)•+ deprotonation. 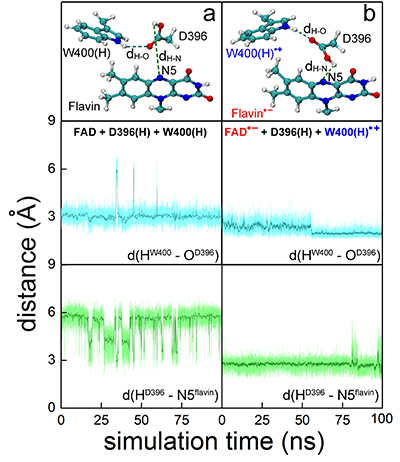 Figure 6. Rearrangement of D396(H) in the cryptochrome active site. (top) Relative orientations of flavin, D396(H), and W400(H) residues obtained through all-atom MD simulations of A. thaliana cryptochrome in water for (a) cryptochrome with oxidized flavin, i.e., FAD + W400(H), and (b) cryptochrome in the radical pair state FAD•- + W400(H)•+. (middle, bottom) Time dependence of the hydrogenbond lengths d(HW400-OD396), labeled dH-O at top, and d(HD396-N5flavin), labeled dH-N at top, calculated for the two different redox states shown at top.

The S2 → S0 back reaction prevents cryptochrome from reaching the millisecond-lived putative signaling state and denoted S in Fig. 4b. However, cryptochrome signaling can take place if the distance separation between the two radicals increases, namely through W377 → W400 electron transfer; indeed, this transfer has often be postulated. W377 → W400 electron transfer is feasible as long as the potential energy surfaces of the RP-W400 and RP-W377 states cross and the energy minimum of RP-W377 becomes the electronic ground state. The condition can be met since the W377 radical is solvent exposed and, therefore, can transfer a proton to the solvent, see Fig. 4. 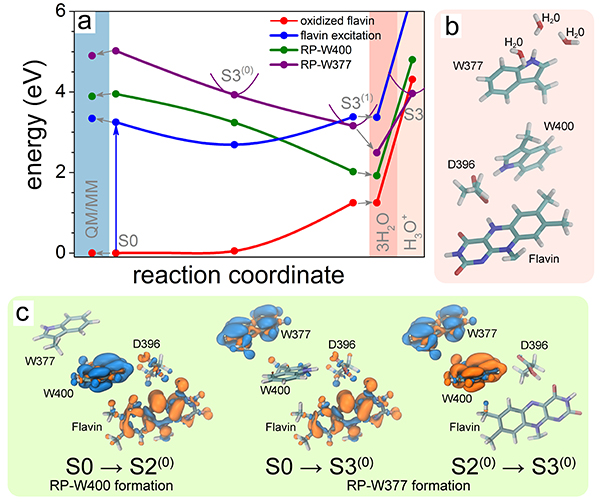 Figure 7. Electron transfer through tryptophan diad. (a) Calculated potential energy profiles for the flavin-oxidized (red) and flavin-excited (blue) states and radical pair states RP-W400 (green) and RP-W377 (purple). Solid circles represent the computed energies, while lines show a schematic profile of the potential energy surfaces. The colored background highlights the results of QM/MM calculations (light blue) and the calculations that account for the presence of three water molecules around W377 (pink). (b) Active site model containing three water molecules in the W377 vicinity. (c) Change of electron density due to electron transfer from W400(H) to flavin (S0 → S2(0)), from W377(H) to flavin (S0 → S3(0)), and from W377(H) to W400(H)•+ (S2(0) → S3(0)). The initial distribution of electron density is shown in blue, and the final electron density is shown in orange.

In order to judge the actual rate of a W377 →W400•+ electron transfer an account of amino acids surrounding W377 is called for. Inspecting the cryptochrome structure, one identifies several polar amino acid residues that are about, 4–6 Angs. away from W377 in the equilibrated structure of the protein. These side groups could accelerate W377 →W400•+ electron transfer by rearranging themselves. Figure 8 illustrates the charge distribution in cryptochrome's active site. The polar amino acids that surround W377 are Q401, T404, and T406, while the charged amino acids, E312 and R313, are directed away from W377 and, therefore, likely irrelevant for the electron transfer rate. 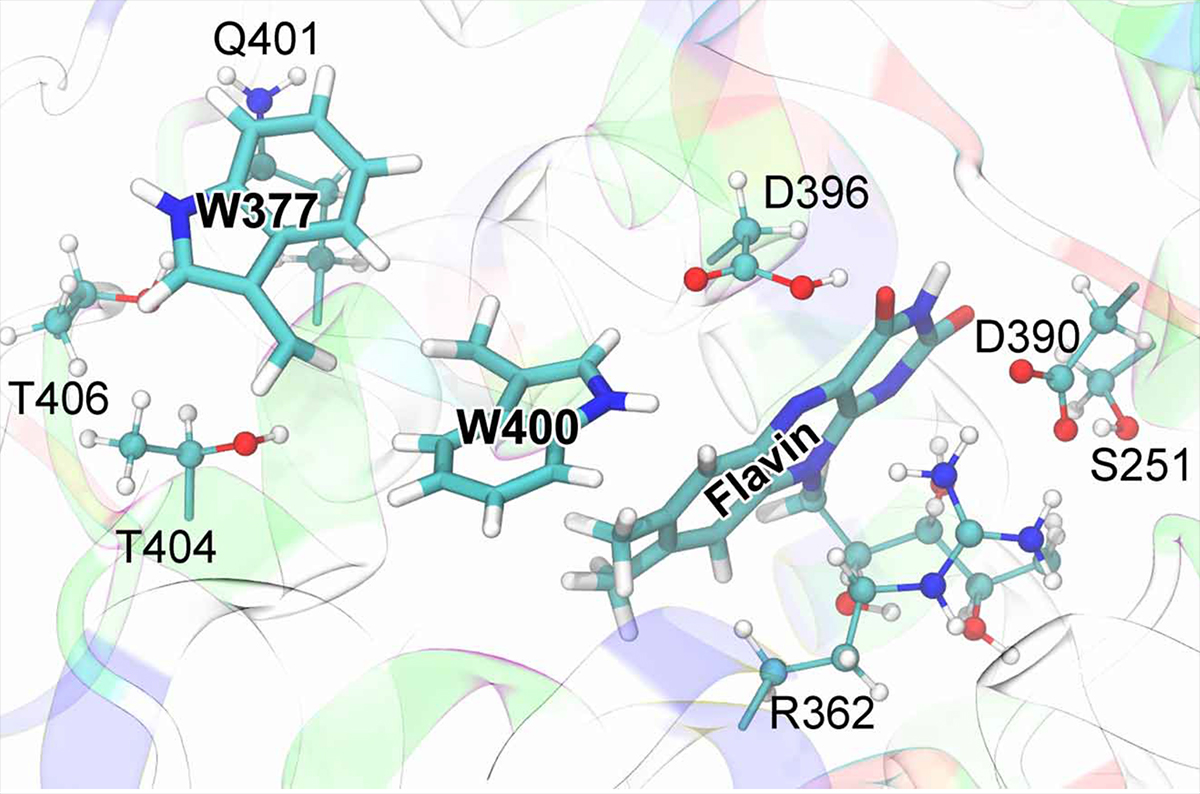 Figure 8. Cryptochrome active site model. The quantum chemical description of the W377 →W400•+ electron transfer in cryptochrome includes electronic degrees of freedom of riboflavin and of the side chains of amino acid residues S251, R362, W377, D390, D396, Q401, W400, T404, and T406. Residues donating and accepting the electrons (flavin, W400, W377) are shown in licorice representation, while the atoms of coordinating side chains are shown as balls and sticks. The coloring of cryptochrome secondary structure illustrates the charge state of the protein's amino acids: positive (blue), negative (red), polar uncharged (green), and hydrophobic uncharged (white). 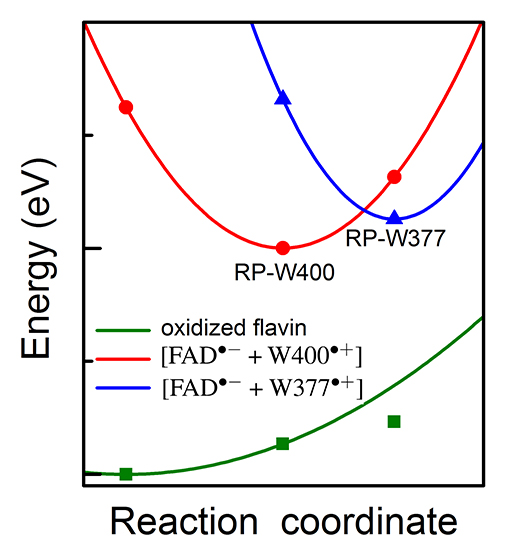 In the present study, the crossing of the surfaces comes about through the rearrangement of W377 as well as of side groups T404, T406 and Q401 as shown in Fig. 10. The computed peaked crossing of the radical pair surfaces in Fig. 9 suggests that the respective electron transfer belongs to the regime where the activation energy hardly exceeds the driving force and, therefore, according to Marcus theory is feasible. Yet, the energy of the RP-W377 optimized state is higher than the energy of the RP-W400 optimized state by 0.26 eV. The RP-W377 optimized state is, thus, at best an intermediate state of photo-excited cryptochrome that would need to be stabilized through, for instance, deprotonation of W377•+ or further down-hill electron transfer. The formation of a short lived, metastable [FAD•-+W377•+] radical pair is, however, necessary for cryptochrome magnetoreception, as it enables a likely, subsequent W324 →W377•+ electron transfer, leading to formation of the highly separated [FAD•-+W324•+] radical pair.

Figure 10. Turn of W377 upon electron transfer. Shown is a rearrangement of the W377 residue in Arabidopsis thaliana cryptochrome, namely a turn of the side group that is coupled to W377 →W400•+ electron transfer. The turn comes about in the quantum chemical geometry optimization calculations depicted in Fig. 16 and involves also the positive W400•+ radical and the polar environment of the W377 residue made up of residues Q401, T404, and T406. A T404OG1...W377HE1 hydrogen bond (right panel, magenta) is formed upon the turn of W377.

In summary, our recent studies, (Solov'yov, Domratcheva, Moughal Shahi, Schulten, 2012) and (Solov'yov, Domratcheva, Schulten, 2014), follows the molecular movement of a radical pair through cryptochrome and provides deeper insights into the origin of the mysterious magnetic sense. For example, animal cryptochromes have a slightly different structure than the plant protein, which means radical pairs in animal cryptochromes should behave slightly differently than those in the plant protein. However, a related electron transfer in the animal protein could create the stabilizing structural change needed for magnetic sensing.