DNA-damage happens in living cells as often as 10,000 times per human cell a day due to numerous reasons. Some of the lesions occur as a consequence of exposure to various kinds of radiation, and can be expressed as as single or double strand breaks, as well as formation of a pyrimidine dimer, base loss, base change or cross-linkage.

To prevent cell death (apoptosis), the DNA damage is sought mended through various DNA repair pathways. Here two of the most important ones are expanded upon: Non-homologous repair of double strand breaks and UV-damage repair by photolyase.

The DNA repair process is quite complicated and involves multiple steps that all features different length scales as well as time scales. The first repair protein to arrive to the DNA nick is the MRN complex, consisting of the three proteins MRE11, RAD50 and NBS11, which initiates the non-homologous repair process for double strand breaks. The process is roughly described in Figure 1. 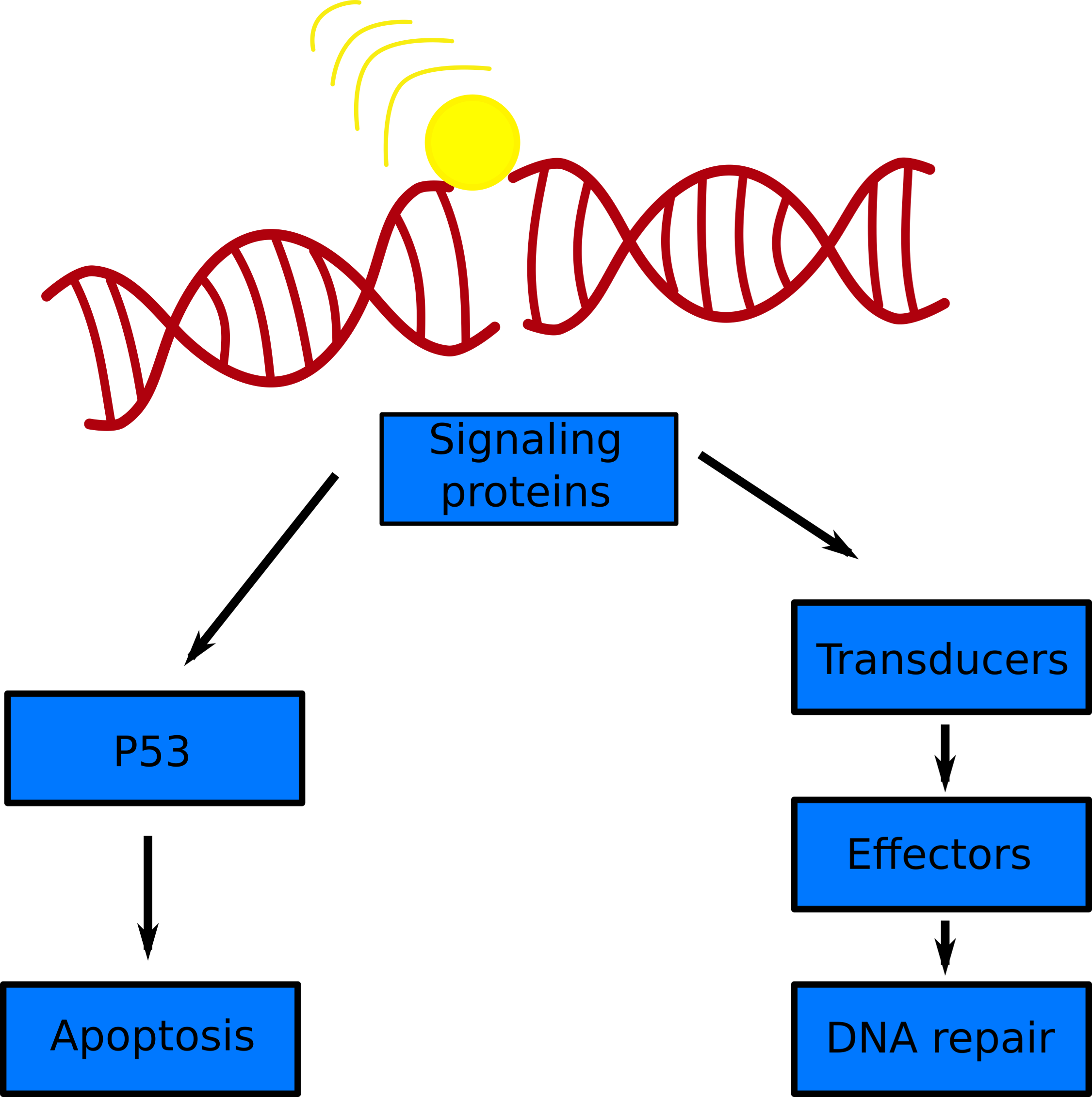 Figure 1: A simple schematic of the DNA damage response to a double strand break. The signaling proteins, here MRE11, RAD50 and NBS1, start the two pathways. One path leads to apoptosis, one part leads to DNA repair.

As diffusion can be described as a random walk, this allows for the construction of both a computational model and an analytical model of the recruitment time. For the computational approach a model with spherical symmetry is constructed with measurements as a human bone marrow cell, as seen in Figure 2. 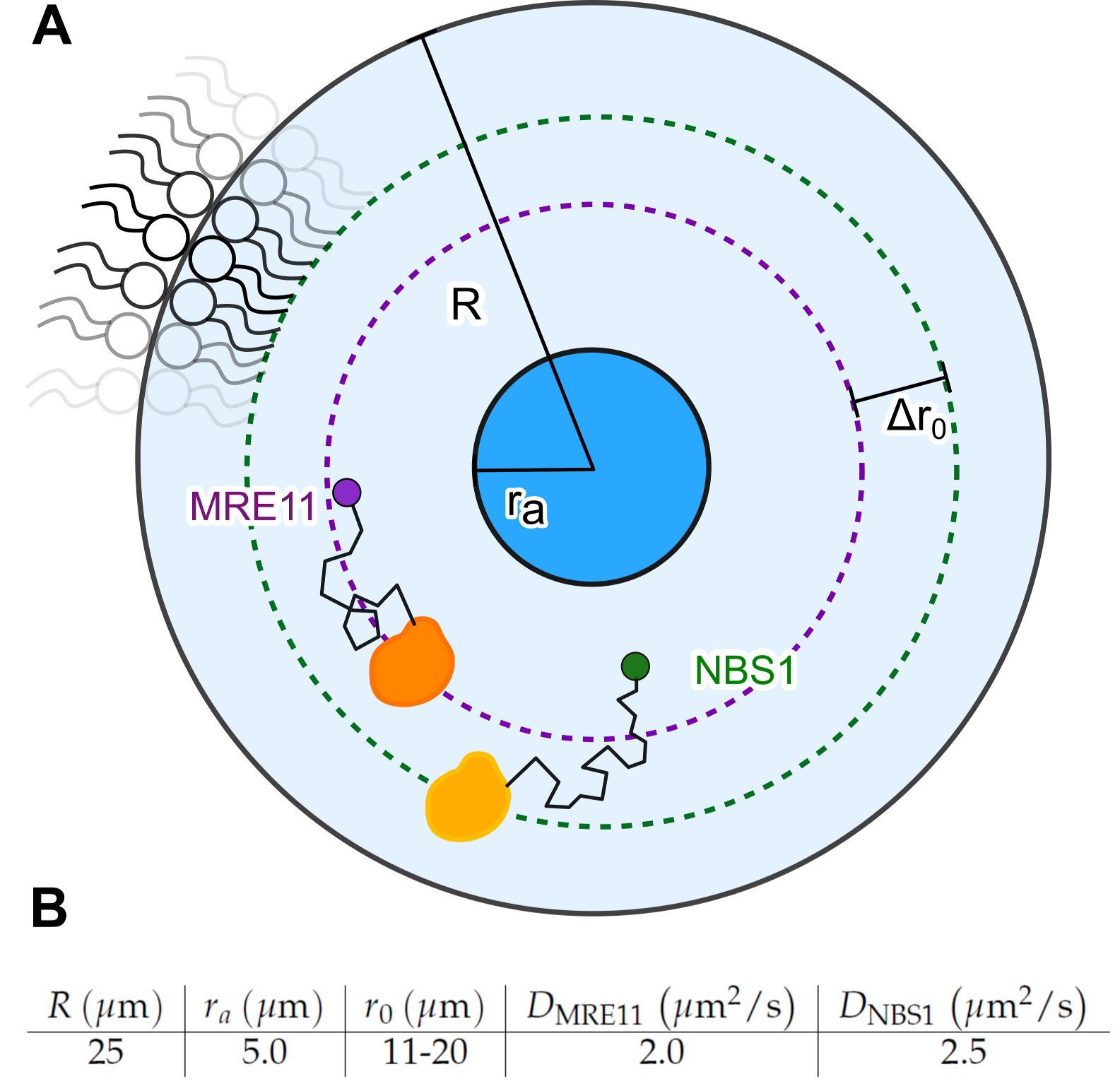 Figure 2: A: The spherical cell model used has an reflective outer membrane at a distance R from the center. At a distance ra the inner absorbing membrane of the nucleus. The diffusion of the repair proteins NBS1 and MRE11 starts at the ribosomes located in the interval Δr0. B: The parameters used in the model as well as the diffusion coefficient for the proteins MRE11 and NBS1.

The results of both the analytical model and the computations can be found in Figure 3. 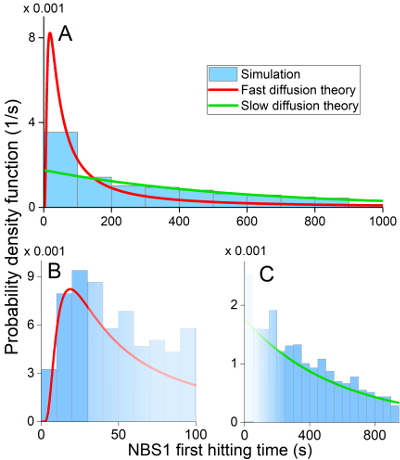 The results show that diffusion can be a plausible theory for the transportation of MRE11 and NBS1 into the nucleus. Further investigations can be made to expand the knowledge of the different steps found in Figure 1.

Another common source of DNA lesions happens at the everyday occurrence when cells are irradiated by UV radiation.

UV radiation is not a powerful as ionising radiation, and it will not make breaks in the backbone of the DNA. Instead UV radiation can lead to the formation of a photoproduct between two adjacent pyrimidine rings in the DNA, which can lead to mutagenesis or even cancer if not repaired. To avoid this, a specialized enzyme called as DNA photolyase could interact with the photolesion and repair it. Important for the repair to happen is the binding of the DNA and the coenzyme Flavin adenine dinucleotide (FAD), a moiety which is also crucial in current theories for vision based magnetoreception and radical pair formation in cryptochromes . Photolyase is structurally highly similar to a protein called cryptochrome and both proteins are biological activated in the same way, namely through Flavin co-factor photoexcitation. However cryptochrome cannot repair UV-damaged DNA. 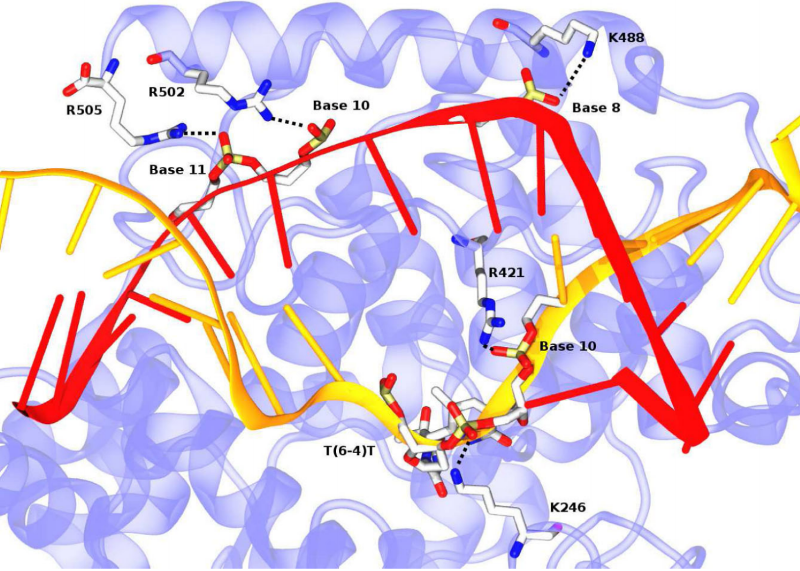 The investigation revealed that the photolyase shows a strong binding to DNA whereas the interaction between cryptochrome and DNA is bordering to repulsive. The deciding factor is the absence of positively charged amino acids arginine and lysine in cryptochrome, which binds to the negatively charged DNA backbone. The important lysine and arginine bondings can be seen in Figure 4.