Methylation of cytosine is a covalent modification of DNA, in which hydrogen H5 of cytosine is replaced by a methyl group. In mammals, 60% - 90% of all CpGs (e.g. where cytosine nucleotide occurring next to a guanine nucleotide) are methylated. Methylation adds information not encoded in the DNA sequence, but it does not interfere with the Watson-Crick pairing of DNA - the methyl group is positioned in the major groove of the DNA. The pattern of methylation controls protein binding to target sites on DNA, affecting changes in gene expression and in chromatin organization, often silencing genes, which physiologically orchestrates processes like differentiation, and pathologically leads to cancer.

At present, five proteins with mCpG-binding motifs have been identified in the MBD family, namely MBD1, MBD2, MBD3, MBD4 and MeCP2. All MBD proteins share a similar MBD of about 75 amino-acid residues. Sequence alignment of MBD proteins reveals several highly conserved residues on the interface between MBD and methylated DNA (mDNA). Figure 1 shows that the most conserved region in the primary structure of the MBD is located between residues ARG22 and LYS46, including loop L1, strand β3, strand β4 and loop L2. The conserved residues of the MBD form the interfacial surface contacting mDNA and are responsible for recognition of the methyl-CpG steps. 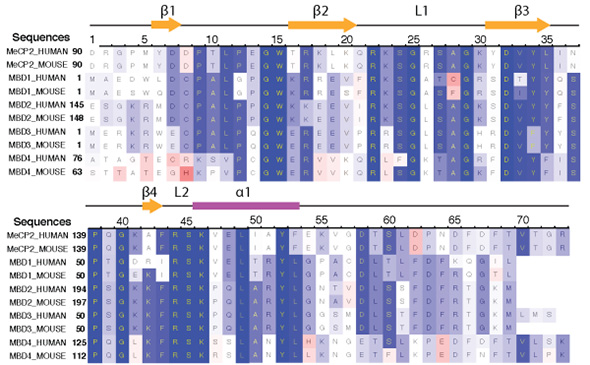 The NMR structures of MBD1, MBD2 and the X-ray structure of MeCP2 proteins bound to the mDNA provide useful information on how residues in the MBD contact mDNA. Figure 2 below illustrates the MBD interaction with the mCpG steps in the major groove of mDNA. The methyl groups of methyl-cytosine are buried in the mDNA-MBD interface. The principal mCpG binding interface composed of hydrophilic and hydrophobic residues involves two types of interaction with mCpG steps: the polar atoms in MBD form hydrogen bonds with the polar atoms in the DNA, while the non-polar atoms in MBD form a hydrophobic patch around the methyl groups. 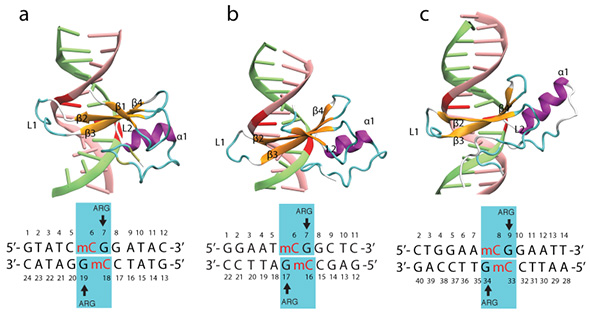 Figure 2. MBD proteins binding to mDNA. Shown are the structures of (a) MBD1-mDNA, (b) MBD2-mDNA and (c) MeCP2-mDNA complexes.

Structures of MBD1-mDNA, MBD2-mDNA and MeCP2-mDNA complexes reveal that the conserved residues ARG22 and ARG44 form hydrogen bonds with guanines in the mCpG steps. To investigate the role of ARG22 and ARG44 in recognizing the mCpG steps, we conducted a 100-ns molecular dynamics simulation of the NMR structure of the human MBD1-DNA complex [Zou, Ma, Solov'yov, Chipot, Schulten, 2012]. Simulations showed that the spatial configurations of mCYT106-ARG22-GUA107 and mCYT118- ARG44-GUA119 adopt a so-called stair motif. Similar stair motifs are formed and remain stable at the MBD2-mDNA and MeCP2-mDNA interface. 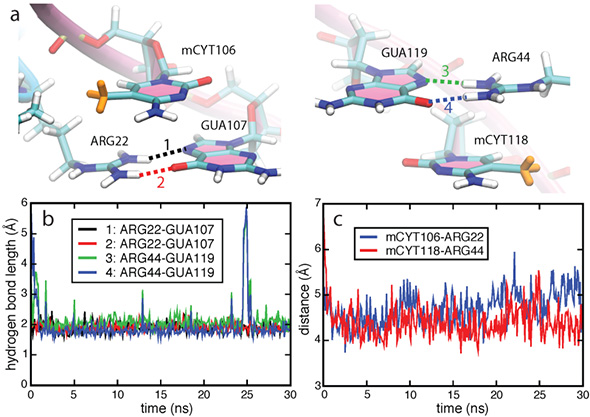 Figure 3. Stair motifs in the interface of MBD1-mDNA.

Mutational studies in which mCYT106 and mCYT118 were substituted by nCYT106 and nCYT118 (nCYT denotes non-methylated cytosine) revealed that MBD1 does not bind to non-methylated DNA, indicating that the 5-methyl groups on the methyl-cytosines are critical for the formation of the stair motif in MBD-mDNA binding interfaces. The influence of methylation on the stability of the stair motif was investigated through a 30-ns MD simulation for the MBD1-nDNA complex, where the mCYT106 and mCYT118 nucleotides were mutated into two non-methylated cytosines. Our results [Zou, Ma, Solov'yov, Chipot, Schulten, 2012] showed that the interactions between ARG and mCYT are more stable than those between ARG and nCYT, as methylation increases the contact area between mDNA and the MBD. 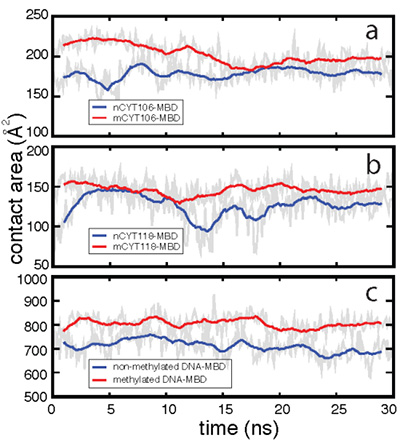 Figure 4. Effect of methylation on the MBD1-DNA contact area. 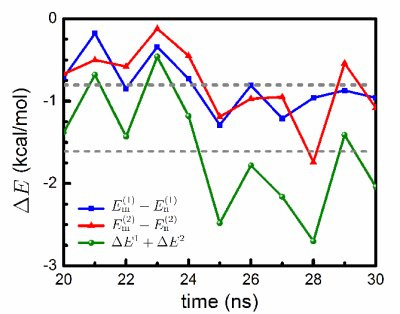 The study of DNA methylation has been pursued jointly with Prof. Klaus Schulten and Dr. Xueqing Zou. The material on this webpage is partly based on the material available at the dedicated webpage of Theoretical and Computational Biophysics Group (TCBG methylated DNA webpage).