Radiation therapy as a means to treat cancer originates over a century ago, and has proven to be an invaluable tool in the fight against cancer. At the en of the 1950's the first trials with proton beams in the treatment began, but it did not make its way to clinical treatment facilities until 1990. Over time, it has been shown that some certain heavier ions can be used to improve the results, and particularly carbon nuclei have proven to be well suited. 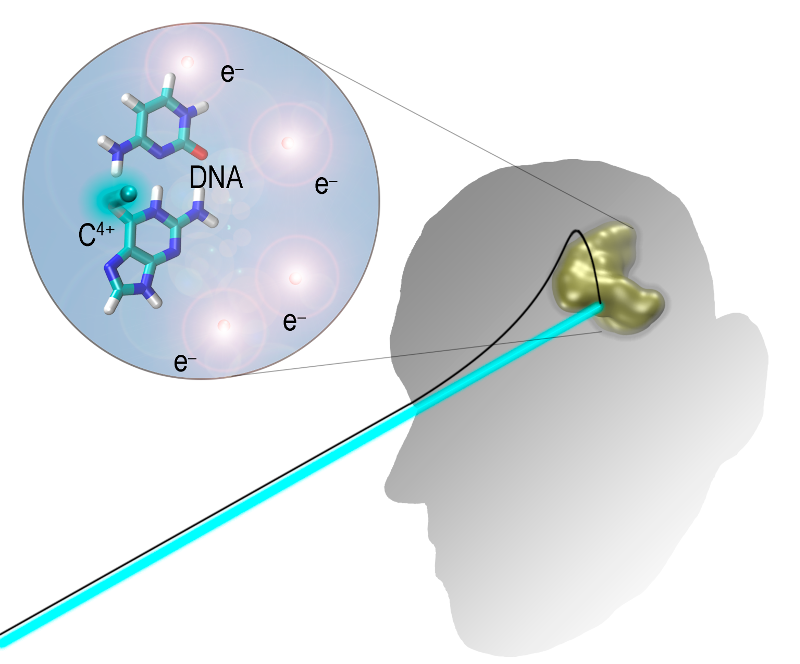 Figure 1 - A beam of carbon ions hit a tumor in the brain of a human. At the microscopic level, one of the carbon ions hits a piece of a DNA strand inside the tumor, knocking loose several electrons, which in turn causes a cascade of subsequent effects leading, in the end, to the death of the cancer cell. The black line illustrates the Bragg curve, which describes the energy deposited by the ion along its trajectory through the tissue.

The technology involved in ion beam cancer therapy (IBCT) has matured, and in recent years the efficiency of IBCT in the treatment of certain types of cancer, e.g. tumors near critical organs, have improved and become more widely accessible. The main difference between IBCT and traditional radiation therapy is the way that the energy of the treatment beam is deposited in the tissue. In traditional radiation therapy, the beam consists of X-ray photons, and the energy deposited is highest in the tissue close to the surface. This means that it is very difficult, and sometimes impossible, to treat deep seated tumors without harming the surrounding tissue. With IBCT, the energy deposition can be controlled much more precisely, since the ions used (typically protons or carbon ions) follow the Bragg curve, which means that most of the energy is deposited around the Bragg peak, which is located at a certain depth inside the tissue, see Fig. 1. The exact depth of the Bragg peak can be controlled by adjusting the initial energy of the beam. This makes it possible to greatly reduce the damage to fragile organs, such as the brain.

An example of a representative molecule could be a base pair from a strand of DNA, for example consisting of Cytosine and Guanine. An illustration of the explosive collisions that take place can be seen in Fig. 2.

Figure 2 - Video rendition of an explosive collision between a C4+ ion and a cytosine-guanine base pair. The green cloud represents the cloud of electrons that are knocked loose during the collision. The process illustrated is very fast, and lasts only a few hundred attoseconds (as). One attosecond corresponds to 10-18 seconds.

The entire collision takes place over a few hundred attoseconds. The green cloud in Fig. 2 shows the electronic density being delocalized following the collision, representing the electrons knocked loose during the process. These are the electrons that potentially will end up contributing to the cascade of effects leading to cell death. 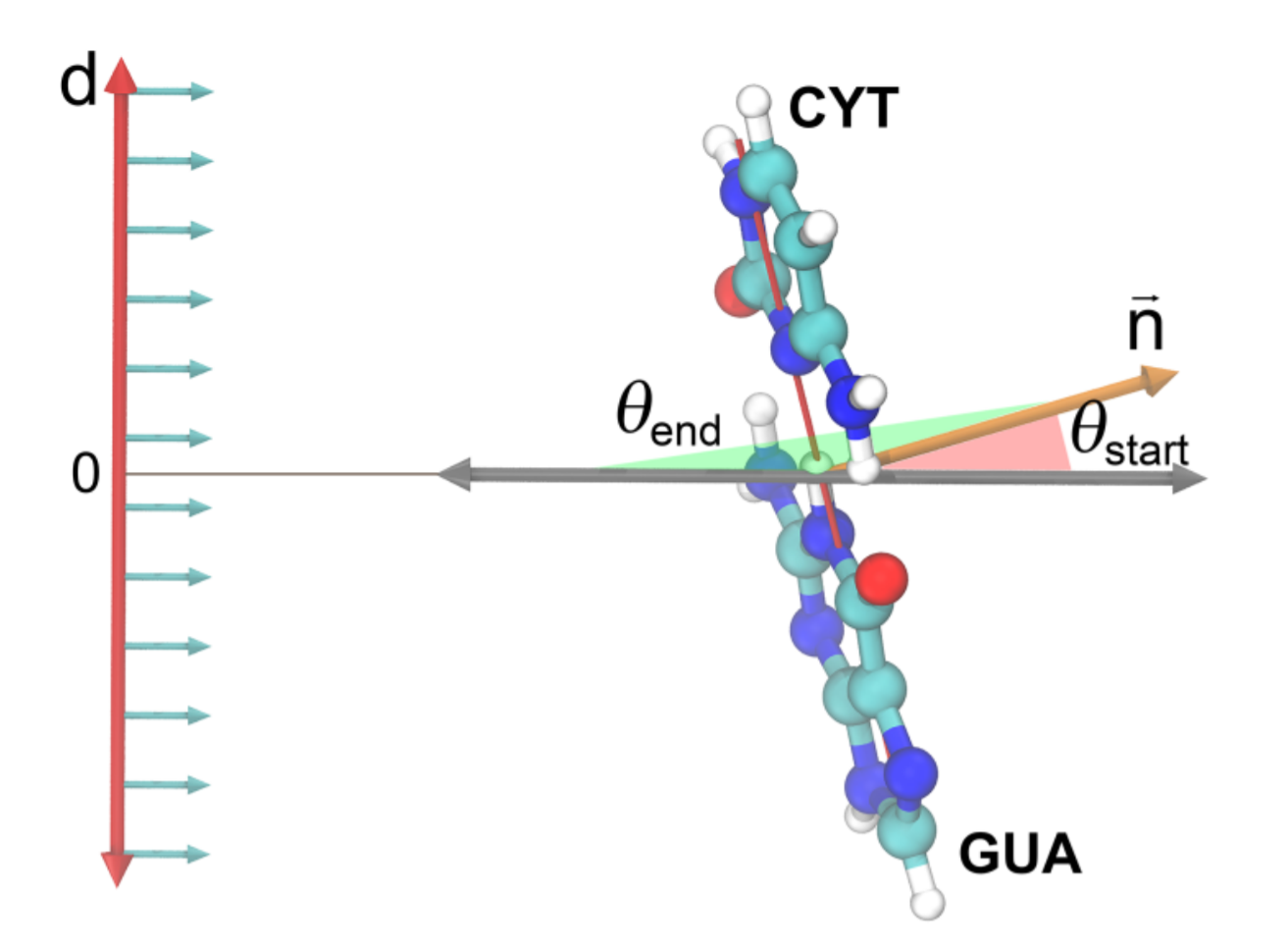 The system is investigated systematically by testing collisions at many different angles (denoted by θ in Fig. 3), and at several different projectile trajectories (displacement denoted by d), on top of testing at various initial kinetic energies of the projectile. 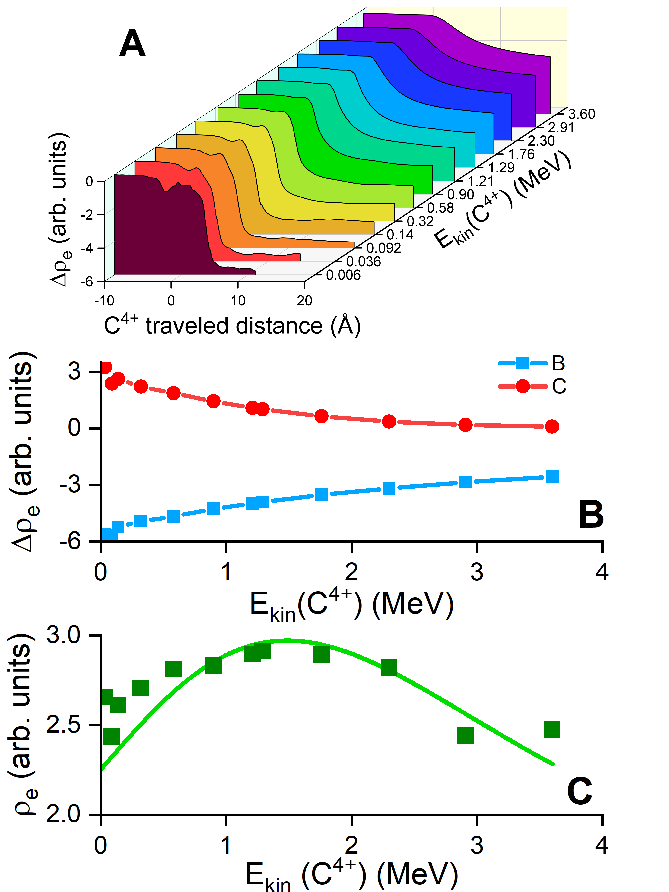 The results depicted in Fig. 4 follow the expectations predicted by the Bragg curve. The greatest effect is observed when the carbon ion has a kinetic energy of approximately 1.21 MeV upon collision, which is where the Bragg peak is.